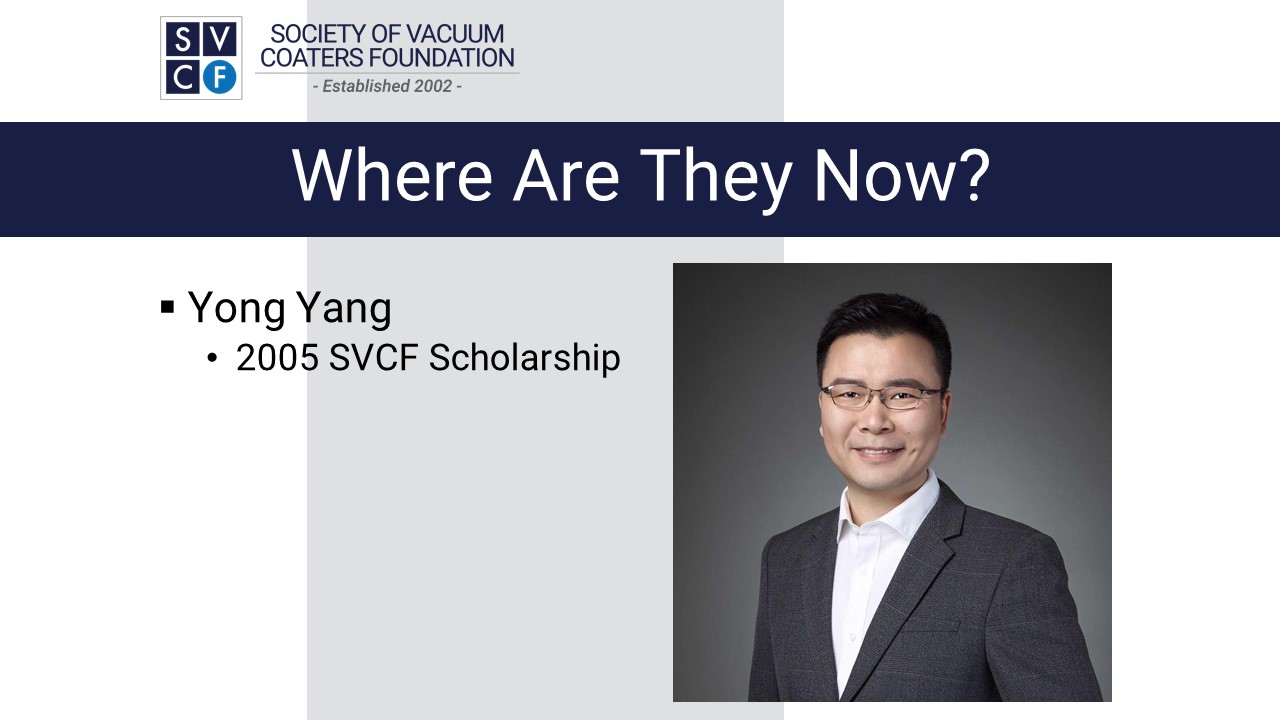 Yong was pursuing his master degree in Electrical Engineering in Tsinghua University, Beijing when he received the scholarship in 2005. At that time, he was working on sputter deposition of ITO films. They found that the corner of the target always eroded faster than the rest of the target, resulting in a reduction of the target material utilization rate. Yong wrote a Monte-Carlo simulation code to predict the erosion pattern of the target. His code helped explain the mechanism behind the observed phenomenon, and eventually they figured out ways to overcome the so-called “cross-corner effect”.

In 2006, Yong received a Ph.D. fellowship from Drexel University in Philadelphia, PA. His research topic switched from vacuum plasma to atmospheric pressure plasma, to study how to produce plasma in water and their applications in water cleaning.

In 2011, he finished his Ph.D. degree and accepted a faculty position in School of Electrical and Electronics Engineering, Huazhong University of Science and Technology located in Wuhan, China. The electrical engineering program there has been ranked Top 3 in China since 1980s. His research is not directly related to the vacuum coating industry, but more focused on the general area of atmospheric pressure plasma, especially novel plasma sources in air or in water , and their interactions with liquids and/or solids.

In 2016, he was promoted to full professor and now also serves as the Assistant Dean, in charge of the undergraduate international exchange program in my school.

Yong was sponsored to attend the 2006 SVC Techcon in Washington DC. That was his first time travelling outside China. He was worried about his English and stayed up all night preparing his presentation for the next day. He also remembers going to another Techcon held in Louisville, Kentucky. “I was already doing my Ph.D. in US, and the experience of the second Techcon was much easier than the first time” says Yong.

“The SVC scholarship meant a lot to me. It’s not just about money, but also about the opportunity it offered, for a young student to travel to the other side of the earth, to see a different world. It gave me courage to pursue my Ph.D. degree in a different country. For that, I owe my sincere gratitude to SVC scholarship foundation. Part of my job now is to find financial support for students who have a strong will to study abroad, either long term or short term. I guess that’s also in part inspired by SVC foundation. We have supported over 200 students to universities like Stanford, UC Berkeley, Cambridge etc., in recent three years” says Yong.

We wish him all the best and congratulate his success and support of the next generation of students!!!

Swetapadma says “I am a PhD student in Electrical Engineering in University of Illinois,...

Jannatul says “I am writing to thank you for awarding me Bernard Henry AIMCAL-SVC...